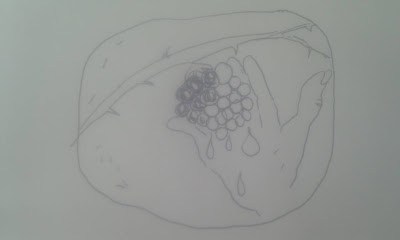 Blood and brambles
Bloody Shambles
Cameron gambles
On Hardline angles
"its criminality undiluted"
Nations youths have been poluted
And while economy takes a tumble
I'm at home making blackberry crumble
Filled with fruits harvested in scrubland
Behind Sainsbury's full of thorns and
Smelt of decaying vegetation
Seemed emblematic of the nation
Made my young son feel ill at ease
Paths ill defined,shapes in the trees
Such physical pursuits to him
Seem unnecessary and alien
I tell myself it does him good
As any self-respecting father would
Hands made for grasping a controler
Each bramble scratch will make him wholer
But now its my hands that are stained
With crimson juices - fear I've refrained
From doing this when he was younger
And somehow bred one more war-monger
But thorny pricks upon my skin
Convince me I should not give in.
Who needs another liberal deserter
In face of national inertia?
Instead of always asking why?
Perhaps we should give it a try.
For kindness and mutual affection
Evade the grasp of rational detection.
Does nature fear over production?
Advertising for her own destruction?
Her shiny globules go unseen
Coming as they do with no touch screen
And yet there they are and in plain view
Within the reach of all through a few.
Backberries are cheaper than an I-phone
There's a new crop behind the pleasure dome.