I love my Job, Hazvarg cajoled himself. I mean all those talented students who respond and in turn teach me so much about my own limitations - my own grounding in a sense of order. But there are also the meetings. The meetings where afterwards I am feeling like I need a shower. There is something almost obscene about them. Something against nature. What is it? He thought scratching his head behind his right ear. They are abominations against human creative endeavour. At the last one the comrade next to him had had the parmesan breath of a man who doesn't sleep or drink enough water because he is up all night devising new and more intricate frameworks to replace the practical experience students have forgotten they paid to experience. This man was delighted in discovering a fleet footed way of incorporating an unmarked essay into the module. Hazvarg felt no desire to tell him that this "unmarked" piece of work would serve no purpose other than further train students to forget the practical training they had once, long ago paid to experience. It was he felt just further indoctrination into the realm of "thinking stuff up". This is an illusion where upon the student creates "research" which purports to show how they arrived at their new and exciting discoveries about their "passions". Sometimes, very definitely, in spite of this system someone would stumble upon a genuine idea and this would be held up for the next decade as proof of the university's undoubted progressive educational methods. Then there was the man who had attempted to lampoon Hazvarg's own programme guide in which he referred to students "standing in front of" works of art. This he had inserted in direct response to the growing custom for students to visit deviantart.com in search of the "uncanny". This is a well-known symptom he reasoned, of the left-brain struggling to find a way out of its self-created hall of mirrors when no genuinely imaginative route is available. He felt sure that none of the art on there would be available to experience in the flesh. The proud portly lampooner had scoffed that he "had stood in front of the Mona Lisa" and asked Hazvarg if he could tell. Thus revealing his own status as being trapped in a veritable Versailles of his own rationality. This Lampooner had managed to fox himself into a fixed state of stasis due to his belief in the brains ability to rationalise everything. The idea that actually walking and moving might affect perception was something that did not even enter the mind of the Lampooner who felt certain he could experience everything in his head. 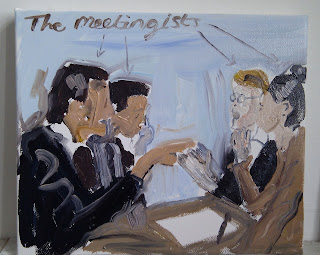