March 13, 2011
My friend and general musical  maestro Rhodri Marsden has just asked me to share some thoughts on song writing for an article he is writing. I couldn't wait to share the unexpurgated version. This is that.
Song writing for me is like most things in life I rarely remember sitting down and making a concerted effort. This doesn’t mean I don’t make an effort its just that I don’t have a recollection of the effort. Upon hearing one of my songs I feel a similar satisfaction as I do when I look at the plinth I fitted under the kitchen sink or the allotment behind my house. 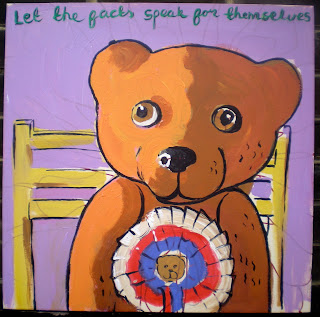 Writing a song is like thinking aloud and being able to see the thought from inside and out. I usually start with a phrase I’ve read or (mis)heard that seems to set off a chain of unbounded synapse connections and let this coagulate into a melody. I try hard to keep that initial melody pure and give it space to develop (not unlike watching the smoke waft up from the bong I customarily never use as part of the process). It’s important that the chords serve the melody and don’t take over in a more theoretical fashion. For me a song is initially a delicate thing so I need to get to know it until it grows more robust. If I am too quick to be assertive things can get formulaic.
Usually I carry the words around in my head and shape them as I walk around. Recently, however, I’ve used lots of lyrics that were written down and never intended to be sung. The rule here would perhaps be that my lyrics either have to be made up in the head or written as some other form completely separate from the tune. When I was ten my teacher told me I was drunk with words (“you know like Dylan Thomas?” she added) but it wasn’t until quite recently that I realised that this might be a good thing when writing songs. For a while when I was on a major label I tried to write using the recommended formula where you start by asking yourself what the song is going to be about. I have a few note-books of lyrics from this time that make painful reading now. Pete Townsend thought that the dislocated nature of Kurt Cobain’s diaries were proof that he had help finishing off songs but I have no written evidence of most of my pop songs unless it was writing then down for someone who needed to know the lyrics (album art work for instance). You don’t need to be Aristotle to know that we can think and share thought processes orally.
This brings me onto singing because this is a heightened form of oral activity. The song and its performance give an edified specificity of meaning. The most trite language can become imbued with beauty in the realm of song (doesn’t mean I would ever try to be trite). I now know that to finish a song I have to really sing it physically to let the melody and lyrics expand. Music critics often use the trick of pulling the guts out of a song and laughing at the “revealed” gaucheness but songs are bigger than the most cynical pop idol wannabe and invariably bring something they hadn’t realised was occurring in the music. Songs are also like Swiss roll in so much as neither really work when served up as their constituent parts. On a slightly more serious note I do believe that song-writing and singing can help to circumnavigate rigid ways of thinking about an idea. It would be nice if they could become part of an accepted decision making process in the loftier realms of politics and society building.