November 06, 2016
The Fungus Foray and Rhizomatic Being 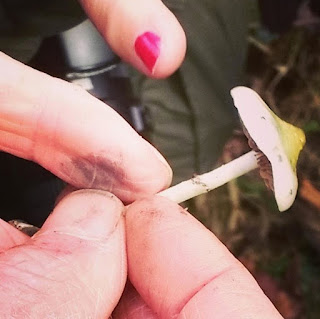 Before setting off on today’s fungus foray I’d been thinking about memory. About how memory is perhaps not simply within the brain waiting to be picked up off the shelf but rather is in the objects around us. I was standing in the back garden looking at my neighbour from hell’s ladder. I found it hard to look at the ladder without relieving the various kinds of abuse we have suffered at his hands. (Thanks to a police visit he seems to have gotten the message that everyone has a right to live without fear of abuse). Still I was ok and it seemed to demonstrate how objects in the outside world don’t just trigger memory they help embody it.

Ever since attending a lecture about consciousness by Marcus du Sautoy (Professor for public understanding of science at Oxford University) at The Barbican I’ve had a sense of unease about the way we conceive of our consciousness from a machine-like perspective. It’s similar to visualising the cosmos with the earth at the centre. Technology and the systems it creates to maintain cybernetic stability force us further into picturing ourselves as individuals or outward looking roving units. This is not good for mental health and not good for world peace. At Marcus du Sautoy’s lecture a lot seemed to be made about access to higher definition of neuro-imaging. I thought then is this really going to help us understand the mystery of consciousness? It's still like looking at the brain as if it's a machine albeit in finer detail and higher definition. Still this is all just base camp background to the fungus foray.

I went with my mum and we waited in the tearoom at the nature reserve with other fungus fans. There was a shelf of cheap books, which led me to ask my mum if she was reading anything good. (Something about the Jeremy Thorpe scandal and a book on Dawn French as it happens). I mentioned a book I’m reading called Proust was a Neuroscientist that I had picked up in a charity shop on a visit Harry Pye’s in Ramsgate. The book takes examples of how artists pre-empted the discoveries of cutting edge neuroscience - namely that there is no mind/body divide – remembering creates memories – memory is fluid – humans are essentially random junk code. It still puts neuroscience in the driving seat – this is what neuroculture does and this neuro-centricity might, may I add, be what prevents us escaping the repeated traumas we inflict on ourselves. Being is not a series of static analysable coordinates but an onflow of experience. Perception is ambiguous and the battle of science to make it unambiguous is false. If, in Proustian fashion, real memory can be a mixture of fact and fiction then lived experience is a continual process of imaginative engagement. Thankfully in the world of real practicalities no one asked to see my membership and we were ticked off the list of attending fungus foragers. I do have membership by the way, I just forgot to take it.

http://ensemble.va.com.au/enslogic/text/smn_lct08.htmWe set off en masse into the nature reserve and at first things didn’t seem too promising. It felt like a fairly fungus free zone. Everyone had the requisite walking shoes and cagoules making it hard to spot our guide Morris Moss but at our first stop it became obvious as he subtly became the focal point. The first stop wasn’t until we’d cut away from the usual route and headed off to the walnut grove.  As soon as Morris started to talk about the fungi you sensed his connection with the ground. His clothes felt lived in and practical not signifiers of his specialist (outdoor) prowess, which is so often the case with specialist clothing. Early signs of expertise were a little unsettling and Morris struggled to enlighten us with the names of the initial specimens. “My poor old memory” he said at one point clutching a very well worn guide to Fungi. The Mycena genus alone seemed to have dozens of variants that all look the same so I could understand him being slow to offer up the exact names.

Walking this way into the walnut grove however seemed to bind us together in the act of looking at the edges of the path. I normally find striding through the nature reserve produces a sense of well-being but this was quite different. I started to enjoy getting my tongue around the various technical names that began to sputter out – scleroderma bovista the little ball-like mushrooms in the edges by the rough of the neighbouring golf course. Did you study Latin a fellow forager asked me? I did I say but at a comprehensive. I just like the sound and the absurdist fun of connecting that to the object. As the group shuffled on, stopping every few yards to examine a new specimen, Morris’s memory seemed to hit its stride and his confidence grew. His tone became clearer and the anecdotes flowed – one variety with a typical dense dark set of concentric rings was called King Alfred’s Cakes (for obvious reasons!). Morris handled the toadstools and fungi like a craftsman; he seemed to know just how they were made up. Some, which looked soft, were rock hard (you can sometimes stand on the artists fungi – named because of the white blank underside) and others, which looked alive, were dead and therefore impossible to name (my only off piste discover). So Morris seemed to be demonstrating the link between memory and the objects outside of us that don’t simply trigger the memory but embody it as if we are casting our minds into the world and catching what returns. Looking at each new specimen in Morris’ palm or betwixt his thumb and forefinger was transfixing. The path was transformed into a voyage into the indecipherable and random world of the ineffable via the vagaries of fungi categorisation. Clearly the Latin name is a devise for putting science in the driving seat but Morris Moss’s passion and expertise meant he was happy to leave some examples as undefined.
absurd academic community consciousness creativity deleuze derive fungi memory nature neuroculture nonrepresentational psychogeography remembering rhizome waking walking