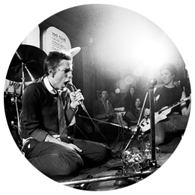 I am standing on the iron fire escape at the back of the 100 club, the rain gentley drizzling onto the neatly stacked pile of equipment I have made by the doors at the top. "I am so efficient" I somehow fail to think with any real conviction. The David Devant and His Spirit Wife Last Ever New Year's Eve concert has been a triumph but not in the tidily packaged way I had almost envisaged prior to performing. "We tore up the script" as they sometimes say in showbiz. Earlier that evening (sometime last year) I had booked a cab and told them to pick me up around the back at the end of Berner’s Place. A legendary load out. Somehow the 100 club feels like a visitor’s centre constructed over the scene of many a glorious battle. As the concert skittered towards pandemonium the black and white image of one Johnny Rotten on his knees by an alarmingly exposed pair of jugs of water on the very same stage popped into my head. It becalmed me and said yes this path to chaos is the right one. This despite, at that precise moment, me still believing that I had finally managed to deaden my hearing completely. As it happens it was just the batteries on my hearing aids both packing up. If I had been at home this would have been the first explanation that sprang to mind but in the heat of battle I was there like some obscure martyr driven deaf by my own stoicism. So now back to the rain moistened steps of the legendary load out. After calls into double figures and a fair few expensive minutes trapped in the overloaded system of the much-revered Addison Lee, I manage to talk to someone working for the local cab company I had booked through. “Would you like me to get the driver to call you?” she inquires soothingly. It feels like prince William himself is about to fly in and scoop me up off a windswept sacred tor. “I am in Russell Square,” says the rather distant sounding driver. “That’s great it’s only round the corner” “I know but I can’t get to you.” And so it goes on for perhaps three quarters of an hour until he has to bail out and leave his car somewhere near Museum Street. During this time I believed that he was probably nowhere near the venue and was just buying time but no he really was so stupid he couldn’t get to Oxford Street. But wait! My fury having risen to unimaginable heights after having carried a weighted piano, guitar and projector screen three quarters of a mile through beery breathed hordes it seems that it’s not his fault and that TFL have closed the streets in order that NYE may more resemble the sickening hopeless end of a post apocalyptic zombie movie. The driver is calm and smiling. He even lets me and my fellow sherpa smoke roll ups in his cab by way of reward/compensation for our Sisyphusian trials. “Ah this is the life” I see the words typed soullessly on a screen in my head. “You’ll laugh about this one day,” the words scroll by. But somehow although there appears on the face of it to be no soul/life-enriching lesson here I know the mainframe is correct. And now a week later my body is nearly back to normal and I’ve been musing about a way of dividing people. Those who seek glorious failure who have a room for smashing things up in their heads and those who just hear “smash it up” as another shouty punk song rather than a life-affirming ode to joy.
100 club damned david devant eve new punk rotten sisyphus spirit wife year's