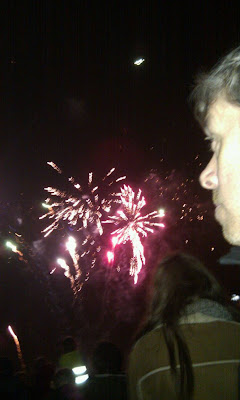 Why does the search for the primordial experience feel harder to find these days? This was a question I half formed in my mind as, en famille, we marched with a growing throng of other villagers towards the annual bonfire (resists the urge to add bun fight). I mean all the ingredients are there – darkness, smells of cooking flesh, general hubbub of anticipation, big fire (not as big as last year – never is – will be a single match by the year 2065), alcohol, explosions and lights from neighbouring villages, mud squelching under foot, barricades… but still it feels like a simulacra of the real thing. We all know what we’re doing. Think of those kerazy surrealist dudes who took up automatic drawing with gusto only to find themselves falling into a pattern of knowing precisely what they were going to draw within a few months. Well that’s like fireworks night or rather bonfire night. I stood there remembering the previous years when I had felt all poetic like I was part of a genuinely pagan ritual (except perhaps the queuing at the bar designed for a dozen people). I made films and took photos. The fireworks had seemed to add up to something beyond the realms of the rational and even then as I had watched I saw their history flash within my mind’s eye – Chinese people inventing them (in lab coats!!?) up to a factory somewhere in the former Soviet Union producing them today. Yes I knew they were a concocted item making cash flow but still as they exploded into the night sky the wonder came upon me. Yes the specificity of the chemicals and the cardboard construction married to the mysterious living lights was a perfect symbiosis of the brain’s two hemispheres. But that was then.

This year I was, if you must know, pretty happy attending the cricket club bonfire without pursuing lofty spiritual enlightenment. No I was happy to be in my sensible Wellington boots holding hands with my boys thinking about the flask of mulde wine in the bag over my wife’s shoulder. This was the nearest I could get to being in Midsomer (without the ever present threat of murder due to the associations the name of one’s locale produces). Simple pleasures. We were well prepared and there would be no overwhelming existential moments at the bar as yet another even foot successful banker/lawyer got served ahead of me. There was lightness to the proceedings - The lady at the entrance with a bucket collecting the fivers and the chance happenings upon friends and parents of children at the same school as our own. There was no over formalisation and no need to hang on to each other in the darkness. Sounds like a vicar’s dream of how church could be. A friend suggested that the temptation on the bucket lady must have been very great and yes ha ha but no I don’t think she even so much as looked in the bucket. Now I know you’re thinking such is the affluent nature of the area we somehow happen to live in but in the darkness it all slowly began to morph into a far more human experience. I guess I’m groping at trying to make something more Breugel than Picabia. The darkness is a great leveller. By the end of the evening life felt connected, even somehow realigned. The bonfire bun fight (okay okay) had acted as a vast human processing machine designed by Dickens. All the niggling irritations I had on the way down like "why are the green-wellied morons infront of me walking so slowly?" had vaporised. Now if I were designing a relaxation cd I might well ask you to imagine packing all your worries into a roman candle and light the fuse and stand back gazing in awe as they momentarily reveal their incandescent fleetingness before disappearing completely. Might have to work on the voice over. I’ve got the music covered.
But how did this happen? I don’t remember noticing. The fireworks were exceptional. So perhaps this was it. There were new varieties – we were all struck by the Catherine wheel crossed with a rocket that created mini solar systems drifting into the night sky. Or the crackling ones -started orange and fizzled into blue, which put me in mind of unwrapping a sweet from a box of quality street in a non ironic manner. Later I described this one to a parent acquaintance as she knew exactly the fireworks I meant from the sound I made (like a rapidly frying lardon) and added “very technical”. Ah you see we find the experience beyond literacy to be quaint but it’s there in all of us perhaps it even is us and we, my friends are, the parasitic wasps. Mmm. Also as we watched the wondrous melange of son et lumier I thought how jolly marvellous it was that we celebrate something that might have happened with what it might have looked like if it had. Of course we aaaallll know that this fulfils the needs of having a post harvest festival gathering around the fire as the nights draw in but it is uniquely British in terms of being a genuine act of surrealism. It would make more sense if Guy Fawkes actually had had the chance to light the fuse and we were recreating the scene above parliament that day but no, a man gets hung drawn and quartered (I’m guessing) and we go about taunting his effigy with how things might have been.
We return home and the x factor unites the nation with a similar display of pyrotechnics. Poor Frankie Cocozza, I muse, a lamb to the slaughter. Poor poor Kitty – you can’t dance luv. All these people, I’m sure are on bonfires around this beloved nation of ours. And somehow, for one night only, it all makes sense.
Published with Blogger-droid v2.0