The Poor Door - A side B Side

“This Ghetto crowding is not through inclination, but compulsion.”

It’s 2015 and we are in the midst of a major housing crisis in the capital. In 1903, Jack London wrote ‘The People of the Abyss’, a book describing the cramped living conditions and experiences of the poor in the East End of London. Reading the book in 2015, some of it seems strangely familiar.
The extreme poverty experienced by many people in Victorian London is another world and another time, but the soaring rents and escalating house prices that London’s residents are experiencing today are similarly disempowering.
The Poor Door exhibition is an arena for debate and discussion surrounding the housing crisis,
an opportunity to challenge the status quo and to campaign for change through visual language including painting, photography, sculpture and performance. The title is inspired by the furore over the development at One Commercial Street in Aldgate, which was built with two separate entrances. Luxury marble floors, chandeliers and concierge for the wealthy city workers, and a side-alley door for the ‘affordable’ housing tenants. The Poor Door is a growing trend in new housing developments in London, but this divisive phenomena seems reminiscent of the Victorian era. 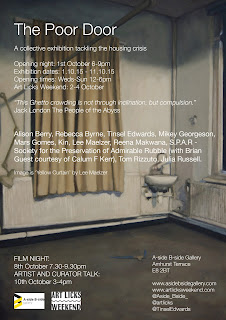 Tinsel: “I’ve been making paintings in response to the housing crisis for a few years now, as time goes on the situation in London gets worse and worse. For The Poor Door exhibition I wanted to seek out and bring together a group of artists who make work about housing, to create a collective response to what is happening in the hope that together our voices will be louder.”
“In a civilization frankly materialistic and based upon property, not soul, it is inevitable that property shall be exalted over soul”
Jack London The People of the Abyss
#ThePoorDoor exhibition is part of Art Licks Weekend, sponsored by Arts Council England. The show has been shortlisted for the Artquest Workweek prize.
The exhibition will raise funds for the Housing and Homelessness charity: Shelter