Tales from the village


The village people gathered round and they asked him to tell them about how they might come to accept change more readily and so he told them a story. 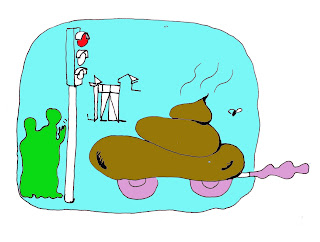 One drizzly winter morning, the kind when the rain can hardly seemed bothered to make anything wet, a local university lecturer was preparing to leave his house with his two young sons, who were playing in the walled garden at the front of the house. The garden was leafy all year round and the man was proud that he had planted the deciduous shrubs himself. Suddenly he heard the raised tinkling voices of his children coming from outside and hurried to find out what the cause of their excitement was. The boys were in good humour but it seemed that one of the household's two tortoiseshell cats had somehow perched itself on the handlebars of the elder sons bicycle when it took its morning crap. In their endeavours to avoid the excrement the two sons had haphazardly engineered to spread small portions of it about their attire. There was now a commotion as attempts were made through various senses to locate the affected areas of their shoes and school uniform. Eventually both of the man’s sons were sent to their bedroom and instructed to dress themselves in fresh clothes for the day ahead at school. On descending their father was struck by how changed his sons appeared, not just in appearance but in demeanour also. They had somehow taken on the air of the children of other parents he met from day to day at the school gate – more relaxed with an inner self-confidence.
All of this changing of clothes and clearing up of cat shit had taken time and he felt it was too late for them to cycle the half mile to the village and besides the bike lock still had an ample sized caramel dollop on it that he intended dealing with later in the day. So it was hastily agreed that he would drive them down the hill that day. Perhaps this decision was taken with more enthusiasm than it otherwise might have been owing to the fact that he would be using a brand new hire car that had recently been delivered to replace the large boat-like silver saloon which was now in a breaker’s yard after a fleeing felon had driven into the front of it. And so the father and his two sons set off with energy in the shiny black hatchback. Both the young boys were ebullient about the neat and sporty style of the vehicle, which still had a pleasing whiff of new car about it. The young university lecturer felt proud to be delivering his now newly confident and handsome sons to school in such a stylish mode of transport. Upon arrival at the school, however, it became clear that there would be little chance of finding an appropriate parking space and so he swiftly made the decision to get his sons out of the car whilst the traffic lights were on red. This task was completed with ease and he felt another surge of paternal pride as he found himself behind the wheel once more. His two sons were now visible through the windscreen patiently waiting to cross the road ahead of him. The elder son waved discreetly as he honoured his parting oath that he would deliver his younger brother to school.
The man drove back up the hill past the church on the quieter road, which unbeknownst to him had been reopened following the completion of the road works.