I am partial to books and diaries that package up epigrams with various pieces of visual paraphernalia from bygone and often overlooked cultural epochs. In one such tome I recall reading that time was created to stop everything from happening all at once. There are certain stories that were created to prevent us from becoming overwhelmed by the prosaic nature of a world where things do not happen all at once. I would list Goldilocks and King Solomon’s Mines amongst these and perhaps also the Crucifixion. These tales are the word-based equivalent of the convex mirror in the Arnolfini Marriage capturing the infinite in a distilled moment. They ought to be published exclusively in the miniature editions viewable only through a magnifying glass such as the copy of the New Testament my Aunt would bring out from time to time, which, if memory serves me well was half the size of a telephone sim card.
It is rare that one’s own life takes on the feeling of happening all at once over a protracted period of consensus time (without of course the intervention of psychotropic substances but this is, I hasten to add, only conjecture on my part). I am wary that by highlighting the resemblance of a dramatic stanza in my life to a scripted event I am in danger of falling into the ranks of conspiracy theorists and paranoid delusionists but I can only report the episode as it revealed itself to me. Here then is Traffic Island as revealed to me in a dream not longer than nine days since. 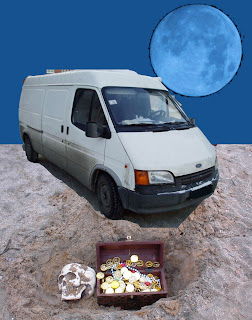