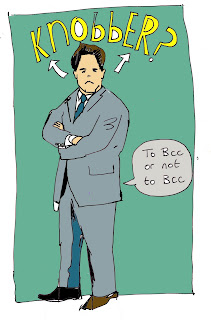 Help I think I might be a knobber. And this is a genuine appeal not some reverse psychology where by I am absolved of knobber-suspect status by dint of my own knobber-awareness. Paulo Coelho said (See!) something along the lines that they only despise and insult you because they can’t understand why the rest would love you so much. Don’t know why I mentioned that because Alex Epstein doesn’t have enough ardent followers for this to make sense in his case. Never the less the extended media family has turned against him. He is said to have emailed some 700 hacks offering his services as a business consultant come agony uncle but what really got them in a tizzy was that he cc’d the lot of them so that now (sharp intake of breath) they all know each others emails. I have done the same with a group of about 50 people and one sent a firmly worded response as a result of my having hurled her very soul into the fiery flames of information hell (articulated in a more succinct and altogether less Miltonian fashion). I now ask myself was she worried that Dr. Vincent Cheng Heu Choon would get in touch about desperately needing help to retrieve a neglected inheritance via her bank account. Perhaps I am forgetting that most grown ups use their real name in an email address but its not exactly a national security number is it? In pre-internet terms it’s more like someone revealing your Warlord members club number. I come from a generation where any personal information is sacrosanct so perhaps even revealing that is transgressive enough. Perhaps the hacks were worried that fellow hacks would commence a remorseless spamming spree on each other- Hey Canarywharf Monetary Bulletin check out this free sick down load in this months Mixing It (well you get the gist).
What really worries me is that having invested a small part of my time in this mind melding dross he, Alex Epstein, was, in my opinion one of the lesser knobbers from a plethora of the genus on show. I really have forgotten who won. Now I remember and I honestly can’t imagine her not promoting her wares had she not done so. Further more it seems odd that an industry of knobbers should unite against a lesser-known knobber for failing to be bothered to bcc. There is also the problem that he didn’t demonstrably work his way up to the position to be able to promote himself and if left unrebuked might do something truly irksome like set up a media memo leaks website (admittedly this might be beyond his skill set). I think that the truth is Mr Epstein reminds us all of how much we resemble rats on a sinking raft. We hate the way he reflects our proximity to raw desperation. This was a collective opening of the window upon getting a whiff of our own bad smell. He who dealt it smelt it.