Auto-destruction. Who or what are the Deadends?

March 06, 2017
The Deadends are perhaps a view of ourselves through the cosmic microwaves of time via a post-apocalyptic primordial telescope. We live in a state of self-hypnosis to permit our disavowal to frame our lives with perfectly engineered precision. We are all akin to the footballer who inhabits a Caravaggio painted mask of pleading sincerity to indicate that he played the ball despite having been pulling his opponents shirt for ten seconds. He believes he is correct in pleading to the referee’s sense of reason. This is clearly an evolutionary glitch that has us in its grip. This separation is what keeps us estranged from the very part of us that would reconnect us to the immediate embodied responsibility to each other. Each and every other.

Now here we will remain until more idiots claim to have a soul. This is Ginsberg saying something similar in the TLS in 1964

"The individual soul is under attack and for that reason a “beat” generation existed and will continue to exist under whatever name Rosey generation lost or as Kerouac once prophecied Found until it is found. The soul that is. And a social place for the soul to exist manifested in this world. By soul I mean, that which differs man from thing, i.e. person,—not mere mental consciousness—but feeling bodily consciousness."

The language of the soul is what will reconnect us but even the artists persist in speaking in the strangulated adenoidal mewl of the systematic mind. The systematic mind that insists on its right to disavowal and moral righteousness fuelled by charity donations and truthful communications on social media. As long as we know right from wrong we can go on maintaining this system of separation perfected.

Gustav Metzger makes art that addresses our separation and consequent lemming like movement towards self-destruction but this conceptualising as moving in a state of progress is part of the problem. More art needs to be speechlessly thunderstruck rather than reasonably ordered in such a way that we can carry on living in disavowal albeit with a feeling of self-satisfied detachment. Its a thought and we can speculate all we like at the Deadendings event on 12th March from 2-5pm at Studio One Gallery Wandsworth Plain SW18 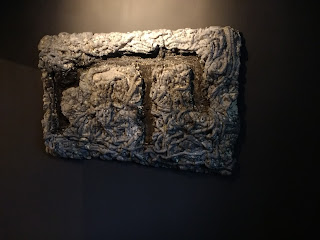 Why should I care about the role played by the imagination in shaping reality? Such is our faith in the systematic convergence of data via the senses that we insist upon the illusion factor when confronted by the falsehoods the senses can muster at any time. Instead we might realise that actually it is collective imagination that shapes the world and consequently a sense of communality. We don’t trust the idea that the imagination is central to reality and having jettisoned it we are left instead with disavowal and self-deception, which we soothe with fantasy – the surrogate version of the imagination. Fantasy is an adjunct we see as being an escape from the harsh reality of black and white data. This is a trick we have played on ourselves in order to forget the idea that our imaginations could shape utopia. Yes utopia is nowhere but so is the universe without the imagination of the beholder.