December 19, 2011
This then is the second part of my Adam Ant adventure. I am no expert on the subject and feel the shadow of an early Ant's bass player fall on the page. Mr Andrew Warren, for tis he, never struck me as someone who stood for much nonsense. I feel privileged to know this punk legend.
The three minute warning announces to the people of Tunbridge Wells that the band are about to take to the stage.
So having recovered from my fit of snake brandishing induced hysterics I return to my seat at the front by the nosebleed inducing PA. First thrill is remembering that Adam Ant always has two drummers. Already my ticket is feeling great value for money. The band, as is traditional, make a forward foray onto the stage to clear the room of all doubters. Then the way is ready for the king/prince (no not leader that’s a very bad man). Adam takes to the stage in finely crafted Nelson style pirate’s hat adorned with peacock feathers. Chief. I was never a fan as a boy yet watching now it is immediately apparent that this man is a real artist. He created a mainstream conduit to the edges of consensus reality. There is a touch of the lost boys and peter pan to this family he seeks to reunite but aside from the clichés I am overwhelmed with a feeling that this is outsider art writ large. My only complaint was that the decibels interfere with the sense of presence but then again I am sitting at the front – a position more beneficial to watchers of pantomimes with stars of Eastenders in. Early tunes such as Zerox and Car Trouble are genuinely idiosyncratic examples of pop punk surrealism and Mr. Ant brandishes a guitar with such dexterity that he banishes all doubts over his musicality. Later when I mention this to other people they say well he has had a long time to practice. And yes it is clear Marc Bolan is something he’s always wanted to be but from where I was sitting his playing seemed like the most natural thing in the world for him to do.  He was saying look I wrote these songs. But that is the poisoned chalice of creating an imagined realm around your pop. Who wants to know who wrote the songs then? Sergeant Pepper get your scrambled egg coat Sir Paul is coming through.

I was struck by how little he said between songs and a charade like quality permeated the atmosphere. We were all part, so it seemed, of a masked interlude in life's proceedings reached through a collective dream state. At times Adam was like a man stuck in a toy theatre left to embellish and perfect his moves, which then took on an abstract level of tribal communication. Later into the set when most gigs would be over he does start to talk. He tells us about Bono forcing him to only play one song at Live Aid (Vive la Rock) and how the lady at Radio One loved his love song but that it just “doesn’t sound like Adam Ant”. I think it was called “you’re Wonderful”. My feeling was that although Adam Ant didn’t write many love songs his pantomime pop had more life and soul in than the crooning new romantics around him in the charts. But clearly this concert has an element of putting some demons to bed. One demon in aprticular that strikes me is Adam reclaiming his image that seems to have been appropriated for the Pirates of the Caribbean by Johhny Depp. This would perhaps explain the self conscious use of the spectacles as a stage prop. Instead of a white stripe Adam is frequently pushing his glasses back up his nose. I would estimate that this entire spectacle takes two and a half hours and at the two-hour mark I have to bolt for the train where I re-immerse myself in the world of Jerry Cornelius a fictional character whose style, mystery and sexual appetite Adam Ant almost rivalled in the real world. Jerry Cornelius is completly fictive so has an unfair advantage of course. 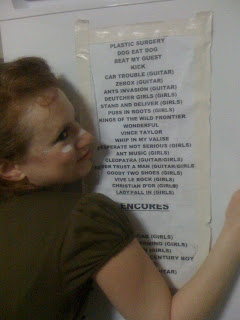 This is my friend Sarah who is a far greater expert than I on all things Ant. be like ants.