June 26, 2011
One of the highlights of my year was being commissioned by Art Brut to draw a comic for a comic book accompanying their new album Brilliant! Tragic! Drawing a comic strip takes discipline and forward planing. These are qualities I seem to reveal more often when I am asked to do something. I think the reason is I don't like knowing what something is going to look like before I've finished it. Something has to happen in the process. What I've been failing to see is that any process will lead to something unexpected. Just the act of drawing begins the metamorphosis. Of course this probably won't happen unless you let the drawing lead you. In a comic this is a more refined experience. The framework is much more defined. The diversions caused by the "flawed" movement of the pen are harder to spot.
I once drew a comic for our band Glam Chops which I hoped would be included in an annual which we all still hope will see the light of day. In the mean time this morning, as a test of my self-discipline,  I drew one to go with one of my own new songs called "Bringing Rocks Back From The Moon". In this I have attempted to capture the simplicity manifested within The Beano. Once I started to draw it the grammar of these comics started to leak into my conciousness. There is something Zen-like about a classic Dennis The Mennis strip. Anyhow here's mine. I think it looks more Psychotic than Dandyesque. 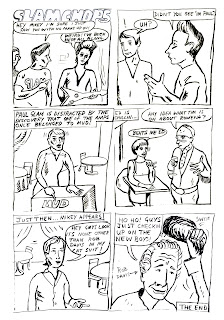