In his Manual of the Warrior of Light Paolo Coelho sets down the teaching that a Warrior never backs out of something he has agreed to do. Otherwise he will spend his life making feeble more and more convoluted excuses. There is a very simple clear lesson here about learning to say no. I think as a middle aged man I  have learnt this but even so sometimes things all come together at the same time making me wish I had said no more often. This is by no means a slur on the activities I was involved in its just that I am a homebody who needs to get out more. In a week where I have to go out more than once I get nervous. So I get nervous quite a lot. I realise that fear is not conducive to a happy or fulfilling life so I try not to be nervous. It’s just that my head is happier floating up in the clouds and going out means connecting with other people. It’s a bit like taking the boys to the park – they always enjoy it when we get there. I really do enjoy conversation. No no really.
Obviously there are some friends with whom conversation is easier and more open. I have made friends with someone recently who makes me feel completely at ease when we talk. Recently we bumped into each other on our way into town for an evening out. He was going for a drink with a client and I was on my way to sing at the launch of David Koresh Super Star. On the tube he introduced a game he once played with close friends whereby small and trifling lies were introduced into the conversation. Great I thought I find a friend who I feel at ease talking with and he encourages me to lie.
Yesterday I bumped into this lying friend at the school fete. He sat down with my wife and I as we sheltered from the blazing sun gently moaning to each other about how so many people fail to connect when talking. The friend started to talk about his work coaching gymnastics and I felt a sudden rush of adrenaline as I realised that this was my chance to introduce an anodyne lie into the conversation. “Yes me and Frank (not his real name) met on the bus (It was really the tube!) last night.” Frank continues, “Yes there was a drunk man.” “How horrible!” says my wife. “Yes he was nearly sick!” I continue remembering that I have now reached the outer limit of excitement allowed in harmless lying. I imagine Kant spinning in his grave. This kind of delinquent amoral lying is all new to me and feels like a midlife crisis waiting to happen. But having been cynical before I rather enjoyed the connection it brought between Frank and me. That glint of conspiratorial recognition in his eyes as I mentioned the “bus”. 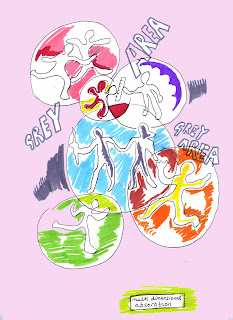