Yesterday I felt under the weather and with my eldest son who was also unwell securely installed in the back of the car I drove to collect my youngest son. This was a smash and grab mission – there was to be no eye contact just get in there and retrieve the boy. After a few circuits of the village I finally managed to get a parking space but not before an SUV driver had in an ironic parody of contemporary selfishness driven into a space I was indicating to go into a good two minutes before he drove up the other way. How we laughed (it was red nose day). 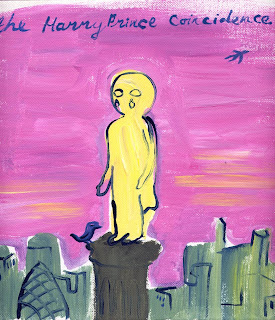 So Youngest son was in the usual spot by his teacher in the playground. So far so good I even semi smiled at the teachers festival hat (big and red). “Dad I’ve made a picture and it’s in the Griffin Hall,” he informs me. He takes me by the hand and leads me there. I love holding my son’s hand but I keep my eyes at 40 degrees – low enough to avoid eye contact but not so low that I look like a loony. We’re in the hall, which had a swanky new deck out the front. This is a posh bit of the school I’ve never visited. There is a frisson in the air - a This is red nose day kind of frisson. We quickly find Youngest Son’s picture (Eldest son is in an unlocked car outside on the street in the middle of an urban village so we hurry). It’s a beautiful abstract with spiral fossil-like motifs and on our way out I tell my son how clever he is that he just drew something when most other children would try and think up some clever idea. We go to pay for his picture. For some reason in my mind I’ve pitched this like a cake sale. You know the odd pound. But before I’ve even had time to flick away the moths pouring out of my bulging wallet the lady is theatrically whispering to Youngest Son that he’s worth more than that. I, being hard of hearing, don’t hear the theatrical whisper and scrabble for the rest of the change in my wallet with two large notes plainly on view. I have misread the level of commitment to red nose day and the ferocity of the village PTA. “We’re trying to raise over a thousand pounds. Think of those starving children in Africa,” she suggests. But I can’t adapt fast enough. Later I think how good I would have felt to give her ten pounds for my sons beautiful picture (handily velcroed on the back) but at the time I feel frozen. I become the stingy dad who doesn’t care about starving children in Africa. I don’t think my youngest son will bare any grudges about my lesson in the harsh realities of the art market but inside I feel like I let an opportunity to make him feel proud of his work slip through my fingers. Sometimes it’s hard to be open to eventualities and I had already decided before hand that I was not going to engage with the realities of the school gate. My brain was caught in a feed back loop triggered by a seed of doubt that charity is in fact there to compensate for a society driven by desire and not need. What flashed through my head went something like this - Charity, like vaccination, is a harsh reality of modern life and the question of whether we can build a society fair enough to live without them is a non starter. But the balance is such that the lack of equilibrium in the global village is maintained by charity and immunisation, which cover for lack of basic levels of sanitation and fresh water. In the early part of the twentieth century America worked out that to stop overproduction we had to find a way of getting people to buy what they desire and not what they need. That what you buy could somehow reflect your uniqueness. Even today we talk about spending our way out of recession. I very attached to my I-pod and my smart phone but both are clearly designed to make me spend money on non-essential items. All of this reminds me of the left and right Brain dichotomy. The left-brain has made it possible for us to expand our awareness by mapping and organising but at some point society became happy with just the mapping and the organising. The system starts to respond to the system and not the fundamental questions facing human beings. In fact human beings are taught, in my experience, how to adapt to the system and do well within it. All this is not to say that the system is bad only that the system is meant to help solve the problems. Just as when the human mind went further and further into the realm of enlightened compartmentalisation it became harder to trust our intuition thus causing greater reliance on rationalisation, so too are we so far down the line of being consumers that we find it hard to be citizens of planet earth unless we ring fence the activity for a day. Carthorse tail dog…
All this is very easy to say and so it should be. For too long the written word has been associated with “gospel” truth instead of evolving ideas and thought processes. The codex as a book format is said to be responsible for the spread of Christianity such was its portability and ease of random access. And yet the codex was designed to be scratched back and erased like a magic note pad and would have been seen as impermanent and perfect for the spreading of ideas and fragile beliefs. Overtime these ideas became fixed and rationalised by the left-brain until we arrived at the preposterous phrase Gospel truth instead of continuing to scratch back and rethink.
So finally a note to myself! If, instead of rationalising the whole thing in the blink of an eye, you had appreciated the wonder of your youngest sons picture and paid the cash tenner everybody would have been happy. Direct local action. I think it’s called living in the moment.